Family law is an important section of civil law that pertains to many types of cases. If you are involved in any family law case, be it a divorce, child custody determination, or anything that falls within the purview of family law, you must abide by the terms of your court order to the letter. Failure to do so can lead to severe penalties. Additionally, it’s vital to be truthful in all your interactions with the family court. 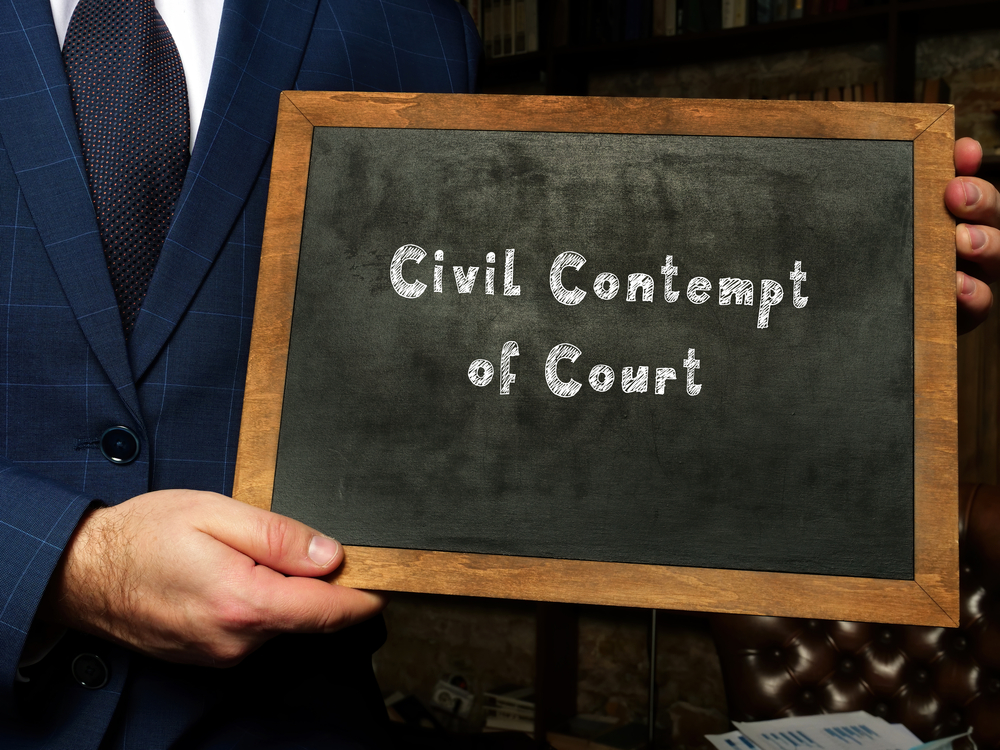 If you lie to the court, present false or misleading information, or fail to comply with a legal family court order, you risk facing contempt of court. While many family law cases are inherently emotional issues, it’s vital to understand your legal obligations when it comes to dealing with the court system. The following are some of the most commonly asked questions regarding contempt of court in family law.

Q: What Does Contempt of Court Mean?

A: In family law, “contempt of court” most commonly comes into play when any party refuses to follow a valid court order. This term can also apply when an individual is disobedient during court proceedings or disrespectful to court officials. Ultimately, any behavior that defies the authority and dignity of the court can potentially result in contempt. It’s important to note that contempt of court in family law is a civil charge, but it can still result in significant penalties depending on the scope of the offense in question.

Q: What Are the Possible Penalties for Contempt of Court?

A: The penalties for contempt of court vary based on the offense. For example, if a parent is held in contempt of court for refusal to pay child support, their penalty could include wage garnishment, asset seizure, or even incarceration until they have repaid their owed child support. If an individual brazenly insults court officials or disrupts court proceedings with deliberate and disrespectful actions, the judge may fine them or even require them to spend time in jail.

Q: Who Can File Contempt Proceedings?

A: The court has the only authority to hold a party in contempt. However, if two parties are involved in a family court case and one believes the other has lied to the court or violated a court order, they can file a motion with the court requesting the judge hold the other party in contempt. For example, if you are owed alimony from your ex-spouse and they have refused to pay, you could petition the court to enforce your alimony order. If the court determines that your ex has unlawfully refused to comply with a lawful alimony order, they will hold them in contempt.

Q: What Should I Do If I’m Charged With Contempt?

A: You should have legal representation if you are involved in a family court case of any kind. If the court finds you in contempt for any reason, you will need to abide by the judge’s sentence and then resolve the issue that led to contempt. For example, if you failed to pay child support on time several months in a row or refused to pay it, the judge may fine you and order incarceration until you repay what you owe.

Q: How Do I Prove My Ex Lied in Family Court?

A: It is also possible for an individual to face contempt of court if they lie to the court. For example, if you recently divorced and discovered your spouse had hidden assets they intentionally kept out of your property division proceedings, this would be tantamount to lying under oath. You would need to file a petition with the court asking for a review of the situation and to hold your ex accountable. Your attorney may coordinate expert witness testimony and other investigative tools to prove the truth of the matter, and your ex would face penalties at the discretion of the judge.

Q: How Can I Prove Contempt of Court?

A: If you file a motion for enforcement or petition the court to address another party’s refusal to follow a valid family court order, this will likely initiate contempt proceedings. You do not need to prove contempt per se, only that the other party knowingly violated a valid court order. The judge handling the case will bring contempt of court into play at their discretion.

Q: Are There Risks to Filing a Motion Seeking Contempt?

A: If your ex has failed to abide by the terms of your family court order, you may want to try and resolve the situation before taking the issue to court. If it was a one-time mistake or they failed to follow your court order due to forces beyond their control, you may be able to work out a reasonable resolution and prevent further similar incidents from happening. If you rush to file contempt proceedings, you may be forced to defend against a petition for modification. For example, if your ex missed a child support payment and you didn’t discuss the issue with them before seeking contempt, they may petition for modification of your child support agreement due to recent changes in their circumstances. It is vital to always consult your attorney before proceeding with filing a motion with the family court seeking enforcement.

Simply refusing to comply with your court order because you cannot feasibly meet your obligations can still lead to contempt of court and severe penalties. If you are having trouble abiding by your family court order, or if you are unsure how to resolve your ex’s noncompliance with your court order, contact an experienced family law attorney to discuss your situation.