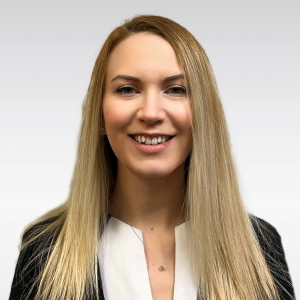 Facing a divorce or family law matter usually comes with a lot of questions and uncertainty. You may not know what your future looks like, and this can cause extra stress and anxiety in your life. When facing these issues, it is important to work with an attorney the understands the situation you are facing and that will be there to help guide you throughout every step of the process. Taryn Folston is a compassionate Senior Associate Attorney with Stange Law Firm, PC. Located in our Wichita, Kansas office, she is able to assist individuals throughout Sedgwick County and the surrounding areas.

Taryn earned her Juris Doctor from Washburn University School of Law, graduating with Dean’s Honors. While in law school, she served on the Board of Editors for the Washburn Law Journal. She was also published in the journal in 2013. Before attending law school, Taryn attended Wichita State University where she obtained her Bachelor of Science in Criminal Justice. While earning her undergraduate degree, she was also a member of the Criminal Justice Society and made the Dean’s List all four years. Taryn is currently licensed to practice law in the state of Kansas.

Before joining the Wichita, Kansas divorce lawyers at Stange Law Firm, PC, Taryn spent time as a Senior Trial Attorney for the Sedgwick County Conflict Office. She also spent six years as an Assistant Public Defender for the Sedgwick County Public Defender’s office. In this role, she gained valuable experience defending indigent clients accused of felonies in the 18th Judicial District Court. She also managed a high case load, including those charged with high level felonies. She was also able to conduct numerous jury trials, preliminary hearings, probation violation hearings, and sentencing hearings. She gained valuable experience with legal research, drafting legal documents, developing case strategies, and overseeing key negotiations. Before this, Taryn worked as Of Counsel for a law firm in Wichita where she handled general practice cases, including divorce matters. Taryn has also served in various other roles that allowed her to gain valuable research skills.