From the moment the camera was invented and someone captured a toothless grin of an adorable baby on film, parents have loved taking pictures of their children.

Of course, the way we share photos of our kiddos has drastically changed over the years. Our parents had to take rolls of film in to be developed and then they might tuck a couple of the cuter pics into their wallet or purse to show co-workers at lunch. Nowadays, thanks to the launch of smartphones and social media, we can figuratively share our wallet of kid photos with literally hundreds of people at once — all with a couple of taps on a smartphone.

However, with this convenience have come some serious risks:

The Prevalence of “Sharenting”

In addition to taking and posting photos of our kids on social media, we also love to share the humorous — and occasionally frustrating — things that they say and do. As a national survey from the University of Michigan C.S. Mott Children’s Hospital noted, more than half of moms and a third of dads admit that they share details about their kids online; this includes posting photos and sharing personal stories. By the time a child is 5 years old, he or she may have an online digital presence filled with literally thousands of photos. While most parents have the best of intentions when they post a photo of their tot in the dentist chair or share an anecdote about his or her first day of school, there can be some dark sides to this trend, which has been dubbed “sharenting.” 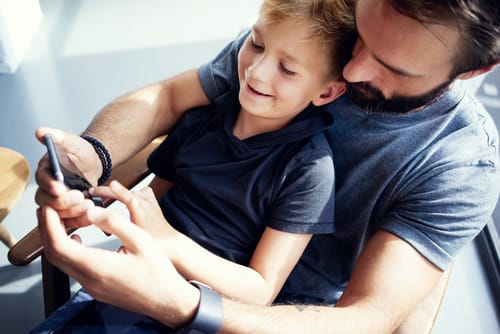 While you might think that identity theft is something that happens only to adults with bank accounts, credit cards and other forms of ID, kids are also at risk. One reason identity thieves love stealing a child’s identity is that it is not as likely to be noticed before it is too late. Unfortunately, sharenting can put children at risk for identity theft — in many cases, parents are putting their child’s full name on social media, along with identifying information like the child’s age or school. Go through your social media pages and eliminate or edit as many “real” bits of information about your kids as you can — for example, start referring to them by a nickname only and remove your home address, school names and other personal nuggets of info. Then, as a backup, consider signing up with a program that monitors and mitigates against child identity theft. For example, LifeLock provides services for family members under the age of 18, which can provide valuable peace of mind.

The Impact on Privacy, Safety and Sense of Self

Parents who are not careful about their safety settings on Facebook and other social media sites may be unwittingly giving predators information about their child and his or her habits and whereabouts. The Washington Post notes, even if you have very tight settings on social media, a friend or relative could innocently “share” your post, allowing total strangers to see it. In addition, sharenting too much may lead to children struggling with developing a sense of self — mainly because their parents have already done it for them by posting so much of their personal business online. Think back to when you were younger and ask yourself if you would have liked it if your mom had shared a video of you literally crying over spilled milk, or if your dad had told all 543 of his “friends” what word you had adorably mispronounced that morning. Parents are ultimately responsible for their kids’ privacy, so as fun as it can be to share cute anecdotes about your kids, it may be best to dial it back.