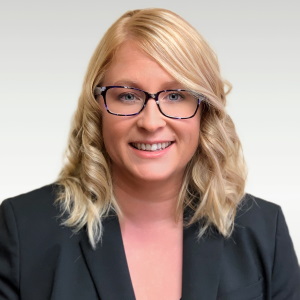 When you hire an attorney, you want to make sure that they are driven, passionate and will work hard for your rights. That’s how Kelly Davidzuk works everyday in her family law practice at Stange Law Firm, PC as the Managing Partner, while also managing the Central Region of the firm in Missouri in Clayton, Union, Columbia, Troy and the St. Louis City (by appointment) office. To help out families with their legal needs, Kelly is also a trained mediator and collaborative law attorney.

Kelly earned her Juris Doctorate degree from the Appalachian School of Law in Virginia. Kelly worked hard in law school and continued to work hard in the area of family law and other areas of civil litigation before she joined the team at Stange Law Firm, PC. Kelly has worked for the firm since 2011. She is licensed to practice in Missouri, Kansas and Oklahoma.

Through her dedication to helping her clients, Kelly has received numerous awards, including:

Kelly has spoken at continuing legal education seminars through the National Business Institute. She has also received numerous awards from organizations such as Lead Counsel, the National Advocates, the National Academy of Family Law attorneys and others. Kelly is also the Treasurer of the Missouri Collaborative Institute.

After living in the Appalachian Mountains during law school, Kelly moved back to her hometown of St. Charles, Missouri. Kelly met her husband shortly after returning to Missouri and settled down in the Lake St. Louis area. In her spare time, Kelly loves nothing more than to spend time with her husband and two sons at all of the outdoor St. Louis Family hot spots. Kelly also loves hockey, soccer and international travel.